Bikes, buses and trains in the Brecon Beacons National Park

For most people travelling to remote and rural areas, the default choice of transport is all too often the car.

But it doesn’t have to be this way – for cycling around Hay and the Brecon Beacons National Park, you can leave the gas guzzler at home and enjoy great holidays and days out using public transport instead.

Hay-on-Wye is connected to Brecon – the gateway to the National Park – and Hereford (with its onward rail connections to London, the Midlands and the North West) by the Number 39 bus. A community-led service – the Hay Ho Bus even runs on Sundays.

More buses link Brecon to Carmarthen, Swansea and Merthyr Tydfil (where there are regular buses and trains to and from Cardiff).

And Abergavenny is served by the X43 bus (get a timetable here) to and from Brecon, plus trains connecting to: the northwest via Stockport; to London, Cardiff and the South West via Newport; and to the Midlands via Hereford.

Drover Cycles is the one-stop destination for bike hire in Hay on Wye and the Brecon Beacons.

From our base in Hay, we offer free delivery and pick-up anywhere within a 20-mile radius for anyone hiring at least two bikes for a day or more.

That means you can:

*Enjoy one-way, traffic-free family cycling, returning to your base by public transport

*Jump off the train or bus in Abergavenny and ride the highest road in Wales, or take on the legendary ‘Killer Black’ mountain bike route in the Black Mountains.

Just for starters, whet your appetite on the pick of local routes below.

Enjoy a pit stop at the best cafe in Wales and refuel for the slog up to the highest paved road in Wales, Gospel Pass!

From Abergavenny, avoid the busy main road by taking the quieter B4246 and A4077 to Crickhowell where you cross the Usk and head west on the A40.

From here, you can either tackle the climb up the A479 through historic Tretower to Pengenffordd, or swerve the traffic by briefly continuing west on the A40 before peeling off north at Bwlch along the B4560 through Llangorse.

Either way, you end up in Talgarth, where the restored watermill hosts the Baker’s Table, an award-winning eatery, which scooped the top spot in the 2015 National Tourism Awards Wales for best cafe.

After refuelling, head onwards to Hay  via quiet lanes through Felindre and Llanigon.

As you come into town turn right on to Forest Road – we’re just on left before the hill if you need any spares – then toil southwards, up and up again below the scarp of Hay Bluff and into the dramatic scenery of the Black Mountains. Their ridgeline stretches away to the south west as you hit the highest point on your ride – Gospel Pass, at 549m.

Take some care now as you descend sometimes steeply to Capel-y-Ffin and onwards to Llanthony, where you can break the ride at the pub and restaurant among the ruins.

Explore the Monmouthshire and Brecon Canal

Local cyclists know all too well: we’ve got more than our fair share of hills around these parts.

Ticking categorised road climbs isn’t everyone’s cup of tea, but thankfully there’s at one least off-road option in the area that is completely flat: The Monmouthshire and Brecon Canal runs for 35 miles from Brecon to Cwmbran, and its hard-pack, traffic-free towpath makes it a perfect for cycling families, leisure riders and beginners.

For a great day out, start at Llanfoist near Abergavenny (well-served by buses and trains) and pedal towards Brecon. The entire leg is about 22 miles – but you you can jump off pretty much anywhere en-route, leave your hire bikes for us to collect, and get the Number 43 bus back to Abergavenny.

Along the way, you can stop off at:

Llangattock – jump off the canal at bridge 115 to visit the impressive lime kilns and imposing limestone cliffs.

Llangynidr – as well as a great picnic and wildlife spot, this the place to see a working canal lock in action, with five canal locks to choose from.

Talybont – this small village is well served by pubs and cafes, including the award-winning Star Inn, voted Camra’s South Wales pub of the year!

Start in Crickhowell, or alternatively ride or get the bus from Abergavenny (we can drop off / pick up hire bikes in Crickhowell for you) then climb out of town to pick up the route at Llanbedr.

Tick off the longest climb of the day, struggling up into the guts of the Black Mountains to a broad shoulder below Pen Trumau. A treat lies in store – a rollercoaster plummet back to base down grassy sheep track and narrow, rocky chutes.

There’s a pit stop in Talgarth at the Baker’s Table if you don’t mind losing some height, otherwise contour around the lower slopes of the Black Mountains before a push-carry-thrutch up a well-armoured path to the top of Y Das.

From there its a plummet to the shores of the Grwyne Fawr reservoir and onwwards through Mynydd Du forest. The ride then climbs on gravel fire road before spitting you out on wild moorland below Crug Mawr.

Another whip-fast, swoopy descent over moorland track and woodsy switch-backs returns you to Llanbedr village. Descend on country lanes back to Crickhowell.

Hit up an idyllic country pub, or extend the route for award-winning food over the border in neighbouring Herefordshire.

Head out of Hay trending east on the B4348 Hardwicke Road, staying on the B4348 by turning right at Hardwicke and onwards to Dorstone. (Here, a steep diversion northeast takes you to Arthur’s Stone, a neolithic burial chamber on the hill overlooking the Golden Valley.)

Stay on the B4348, through Peterchurch to Vowchurch, where there’s a chance to stop at the Poston Mill tearooms and restaurant, then turn off right on a tiny lane to Michaelchurch Escley, home of the Bridge Inn country pub. Here you’ll find locally produced food plus real ales and ciders. 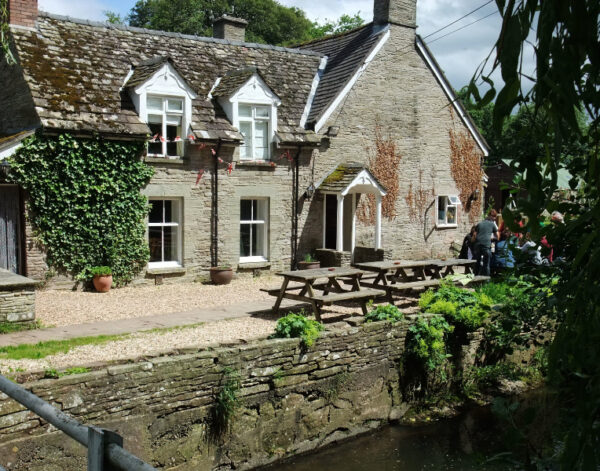 Extend this route for award-winning fish and chips! Instead of turning off for Michaelchurch at Vowchurch, head south on the B4347, past Bacton Stud and through Abbey Dore to Ewyas Harold, home of The Old Stables fish and chip shop. Then head west, cross Escley brook, and go north to Michaelchurch Escley.

This one straddles the border between England and Wales and explores sleepy Herefordshire villages via quiet country roads, with two great pub stops along the way!

Turn right out of the Drover Cycles car park and right again at the bottom of Forest Road. Stay on the main road, heading out of town towards Clifford and onwards to Whitney where the historic wooden toll bridge takes you across the River Wye.

Head east for a short distance on the A438 then bear off left on a quiet lane to Eardisley, where the Tram Inn serves great home-cooked food and quailty real ales and ciders. 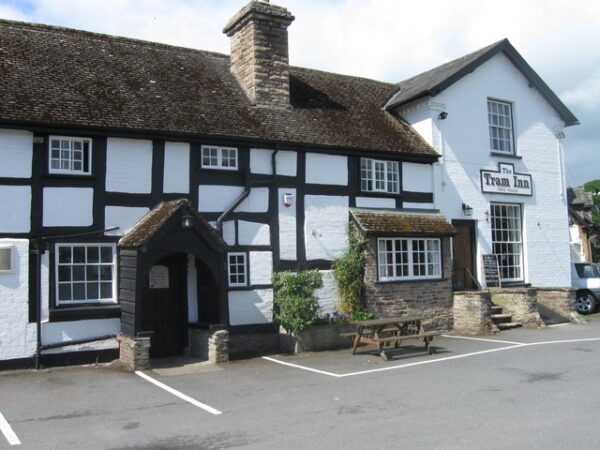 Another quiet lane takes you to Almeley before you head south to Kinnersley, crossing the A4112 and continuing to Letton. After half a mile on the A438, head south again to the tiny hamlet of Bredwardine, crossing the Wye again via a brick arched bridge. (As a diversion, consider stopping off at nearby Brobury House and Gardens). If you’re in need of refreshments, dive in the Red Lion pub – a former 17th Century coaching Inn – before the final 8 miles back to Hay along the B4352. 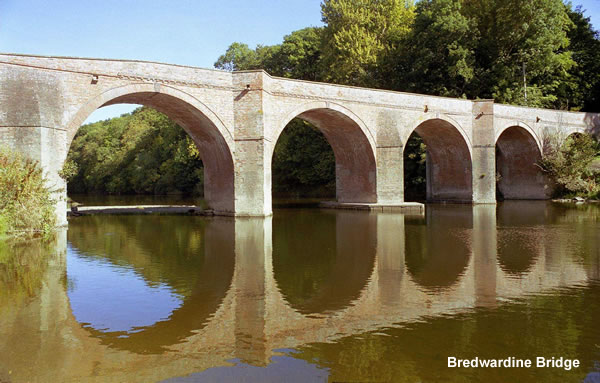 Extend this route and make a day of it – an extra 28 miles / 3-4 hours – to explore some of Herefordshire’s black and white villages. From Almeley trend east through Woonton and Meer Common to the A4112, crossing it to Weobley. Leave the village again trending east, then swing north to Dilwyn and onwards through Lower Burton to Eardisland. Go west then South to Pembridge and continue south to Bearwood – you’ll pass legendary cider mill Dunkertons on the way where you can stock up at the mill shop. Go west through Weston (the watergardens and follies make an interesting stop), then head southwest and, finally, south back to Almeley.