Carbon road bike bargain – save £1k on a Neil Pryde!

Neil Pryde burst on to the road cycling scene a couple of years back after making their name in windsurfing equipment, bringing their years of experience developing proven aero technology to designing and building bike frames.

The result was a range of sleek, carbon road weapons that aimed to cheat the wind!

And Neil Pryde must have been doing something right – they put United Healthcare’s pro team on 90 podiums in the 2013 race season.

We have an ex-showroom Neil Pryde Zephyr up for grabs, in immaculate condition.

It’s left the shop only a handful of times, and you’d be hard-pressed to tell it’s ever been ridden. 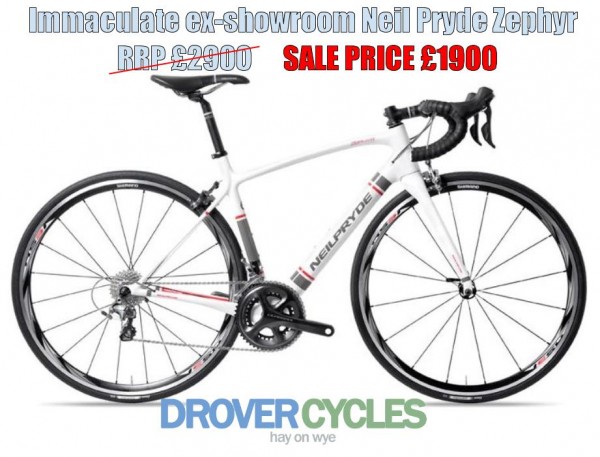 Neil Pryde say the Zephyr is designed for the strongest of racers, but compliant enough for sportive cyclists.

The bike impressed reviewers at Road.cc, who gave it an impressive four-star rating in this write-up, concluding: ‘”The NeilPryde Zephyr is a comfortable performance bike that’s a blast to ride.”

Cycling Plus magazine also awarded the bike four out of five stars in this review.

And for an honest, street-level appraisal of the Zephyr, check out our ‘Bike of the Month’ customer review here.