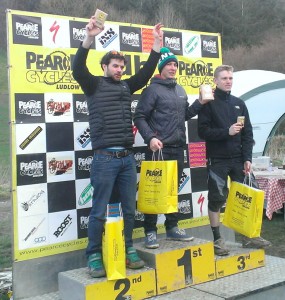 There’s high excitement at Drover HQ at the news of our sponsored rider Lewis Day taking the win at the Hopton Gravity Stages enduro at the weekend.

Lewis’ impressive riding style has been on our radar since the back end of last year, and the Hopton race was just his second competitive event under the Drovers banner.

He didn’t disappoint on the day, shredding his way to his first ever podium – and bagging top step into the bargain!

Said Lewis: ‘As the day went on, it dawned on me that I could be in with a chance of getting on the podium, but I was convinced I was going to have a massive crash and throw it all away.

‘Needless to say, it was a great feeling to win and one that I’m sure is dangerously addictive!’

For anyone not in know, enduro-style racing is the event format of the moment – so much so that it’s seeping through to bike design and marketing lexicon.

Riders race the clock on a series of timed downhill stages, with untimed ‘transition’ sections in between.

The Hopton comp had four downhills and Lewis clocked up a time of 20:07:33 to take the win in the ‘Senior’ category.

Impressively, his whip-fast time would have seen him take sixth place in the ‘Elite’ class, competing against top pro riders.

Going forward, Lewis has grand plans for the rest of the season with his eye on a UK Gravity Enduro Series onslaught in 2015.

He added: ‘For  now, I want to compete as much as possible, next race being the Forest of Dean Mini Enduro towards the end of April. Other than that, I plan to spend as much time as possible on the bike – be it road or mountain!’ 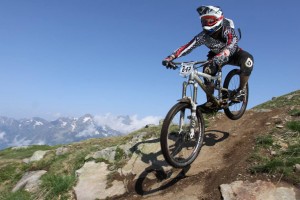 Of course, we at Drover Cycles wish Lewis the best of luck with the rest of the enduro season, and look forward to seeing him climb the podium at future race meets.

Check back on the blog for a full Hopton race report from Lewis, as well as his ‘top tips’ guide to enduro racing.

You can see Lewis’ review of our Pyga One-Twenty trail bike here.