Thinking of getting into road cycling for 2014? Looking for a new ride?

The new Genesis Equilibrium Disc might be just the ticket – it’s just picked up a cracking 4-star review in Cycling Plus magazine.

We’re one of Genesis’ official demo centres – and we’ve got the Equilibrium Disc in store for you to try. 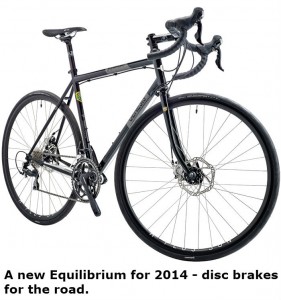 But this is a road bike, right? What’s ‘disc’ about it?

Genesis have broken with established road riding tradition for 2014 by bringing the superior stopping power of disc brakes – usually found on mountain and cyclocross cycles – to the road bike.

This kind of set-up might not appeal to the weight weenies, and it’s certainly a step into controversial territory, but insiders reckon discs for road racers are the future.

The Genesis Equilibrium Disc is built up with a frame fashioned from Birmingham-made Reynolds 631 steel. Reynolds also provide the raw materials for specially designed tapered fork legs, which complement the increased – and repositioned – forces of a disc brake.

We’re not saying disc brakes are going to replace traditional caliper brakes on road bikes overnight, but Genesis have got it spot on with this: “We think road disc has a definite place and brings with it some tangible benefits for the masses. It is the ideal partner to our Equilibrium range where the emphasis is a little less on ‘race’ and more on ‘ride’.”

Cycling Plus said the Equilibrium disc is a “beautifully-built, fun and involving bike for composed cruising. It willingly springs into action when hustled, accelerating with enthusiasm and maintaining flatland spead with ease…the power of the disc brakes maximises the frame’s deft handling, making descents fast, fun and safe.”

Drop by the shop or give us a call if you fancy finding out what disc brakes bring to road cycling!