Le Tour in Wales – sounds like a reet grand idea!

Anyone who watched the Tour de France this weekend couldn’t fail to be moved by the sight of thousands of spectators thronging tiny lanes as road cycling heroes did battle up hill and down dale in stunning Yorkshire.

But if you’ve spent any time cycling in Wales, you’ll know the nation is also home to some world-class riding, from the legendary Tumble near Abergavenny to the Devil’s Staircase in Powys.

Now a Welsh Assembly Minister has repeated calls to bring a future Tour stage to Wales – which we reckon sounds like a reet grand idea!

Peter Black, shadow minister for Culture and Sport said: ‘Cycling has grown from strength to strength over the past few years, boosted by double British success in the Tour de France and home-grown talent like Nicole Cooke and Geraint Thomas.

‘Hosting the Tour de France would once again put Wales on the world stage, bringing tourists to our nation and boosting revenues particularly for independent businesses. According to estimates, the Welsh economy could benefit by up to £115 million if this were to happen.

‘Wales has already hosted major cycling events, including stages of the Tour of Britain and most recently the National Road Race Championships in Monmouthshire. Our mountains and hills and our beautiful scenery makes Wales a challenging and spectacular backdrop for the world’s top cyclists to visit.’

This year’s Tour of Britain features two Welsh stages, passes practically on the doorstep of Drover HQ and climaxes on The Tumble. 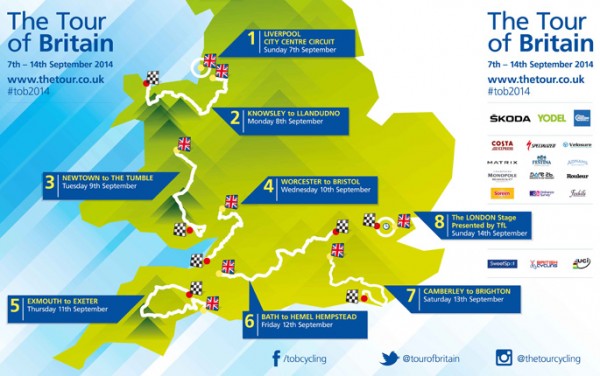 But you don’t need the thighs of Wiggo to enjoy the same stunning Welsh riding as ace athletes competing at the top of their game.

On a cycling break with our sister company, Drover Holidays, you can cover Tour of Britain territory at an altogether gentler pace – over days rather than hours – and instead of battling to hold your line in the peloton, the most you’ll have to worry about is where to make your next cake stop.

Their 3-day trip, the Black Mountains Triangle, features an overnight stay in Crickhowell (no such luck for Tour riders on September 9th – they blast straight through) via some stunning riding through the far east of the Brecon Beacons National Park.

And if you want a longer break, their 7-day package ‘Best of Mid-Wales’ meanders through Knighton (another dot on the 2014 Tour route) before reaching Crickhowell on the penultimate day.

The good news is – sigh of relief – you won’t have to trouble yourself with anything quite as strenuous as The Tumble on either tour.

But if you’re looking for bragging rights, how about this? Both trips take in the dramatic Gospel Pass – the highest paved road in Wales. Its comparatively thigh-friendly gradients may not match the dizzy heights of the Tumble, but the altitude certainly does!