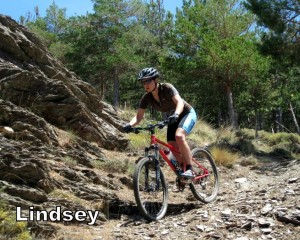 Where do you live? Presteigne

How long have you been cycling? Since I was a child, when I used to do silly things like race my Dad down the hill in our garden on an old shopping bike with no brakes. Been taking things a little more seriously for the last four years or so.

What type of cycling are you into? I enjoy cycling as a means of transportation – getting to work, going to the shops, seeing a bit of the world…and I’ve been in love with mountain biking ever since the first time I stumbled around Llandegla about five years ago.

Best day on a bike? Hmmm…one of my favourite memories is a three day bikepacking trip on the Trans Cambrian Way, in uncharacteristically glorious sunshine. The terrain was fantastic, it was tough (but not too tough), and just brilliant fun.

…and the worst? Mountain Mayhem 2013, the final lap. The toughest ride I’ve ever done! Got stuck in the woods half way round, when the bike was so clogged up with mud the wheels wouldn’t go round, and it was too heavy to pick up and carry – didn’t think I’d ever make it out! But somehow I did, and when I eventually crossed the finish line after nearly three hours of pushing, dragging and occasional pedalling, I felt like I’d won the world!

Plans/goals for 2014? As a new mother, race plans have been put on hold – my main goal is to try and cycle a bit every day for as long as possible!

What is your day job? I work mostly on the retail side of things at Drover Cycles – and I’m working on an exciting new project, to be unveiled soon…

What do you do other than cycling? I love spending time in the garden, walking and cooking. Unfortunately for anyone nearby, I also try to play the ukelele from time to time.