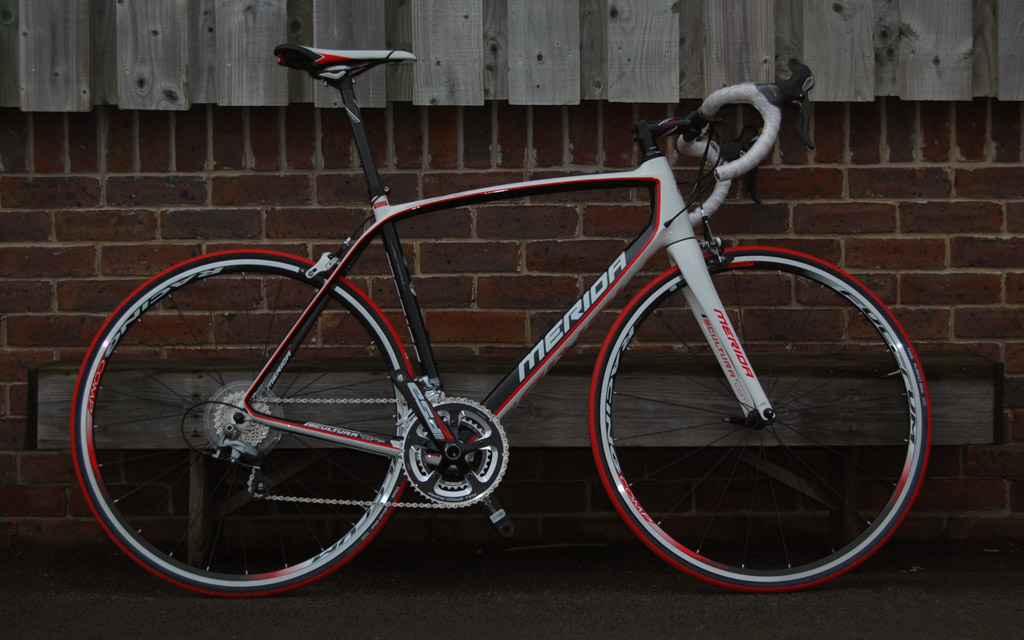 A few weeks ago I did a little round up of Merida’s road line before I gave them a full test in the early season races. Since then I’ve managed to get in about 300 km of racing on the Scultura Comp platform (the frame is the same throughout the range – only the component spec changes), made up of a few ‘crit’ style races and a road race.

I’ll focus on the frameset for now as reading groupset reviews can be a little tedious (bottom line being it’s Shimano….it works!). Without a doubt the Scultura Comp is the best performing frame I have ridden at this price point (the 904 model equipped with Shimano 105 comes in at £1500). My experience of mid-range carbon bikes from a variety of brands is that the frame tends to be great at one thing. It may be fantastically stiff, or particularly comfortable, but as a rule you have to go up to a top level frame to get the engineering required to give you a well rounded package that can tick all the boxes. Not so in the case of the Merida Scultura Comp, which is packed full of features found on their top level bikes (and that actually work too, not just fancy decals!). The first evidence of this became visible when I was setting the bike up on the turbo-trainer to get my bike-fit dialled in (luckily for me I can get a suitable fit on both sizes that we have in stock!) – with the saddle weighted you can visibly see the ‘flex stays’ in action and the saddle is allowed to spring rearwards to help take the sting out of rough surfaces. I was also pleased to note that there was no such flex laterally which would be annoying to say the least! The frame torturer that is the turbo also gave a hint of what was to come in terms of front end stiffness – the bars barely moved even during pretty hard intervals. Out on the open road this translates to amazingly sharp handling and I was soon tackling tricky descents as fast as I ever have with full confidence. The ‘flex’ seat-stays were working nicely too, and my bottom was reasonably oblivious to the damage the harsh winter has done to our roads!

Despite actually being comfortable the Scultura Comp doesn’t ride like a ‘comfortable’ bike with a wishy washy bottom bracket; it responds well to sharp accelerations, complementing your effort rather than absorbing it! It doesn’t offer the all out stiffness of a top-of-the range carbon frame, but it is certainly no slouch and I had no problems under the pretty harsh demands of racing! The great thing about carbon fibre is that you can build all of these features into a frame so that it can be equally at home attacking on the steepest of incline as it is carrying you through the demands of an all day breakaway. The downside is that this is quite difficult to achieve and usually results in an expensive bike, so it’s really good to see Merida achieving this at an affordable price making the true benefit of carbon fibre bike more accessible than ever before.

Don’t just take my word for it though; get in touch to book a test ride on one of the Scultura Comp bikes or to order one of your own!