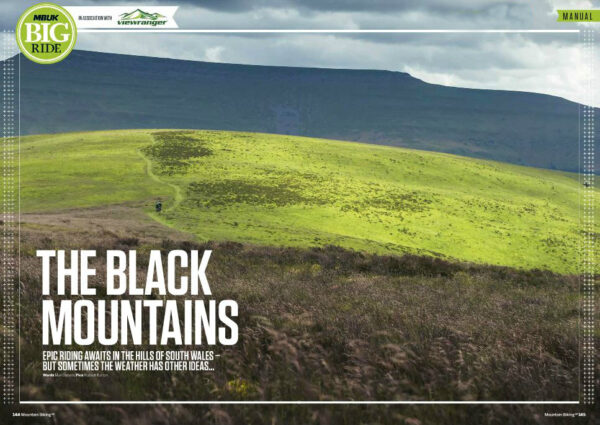 The mountain biking magazines have been going crazy for the Black Mountains recently, with both Mountain Biking UK and Singletrack Magazine dispatching their writers to take on some of the range’s epic routes.

On the eastern edge of the Brecon Beacons National Park, the Black Mountains are just a short hop over the Severn Bridge and easy to get to from the M4. They’re by far the closest proper mountains (ie: big!) to London and the South East, meaning you can easily bag yourself a wilderness Wales mountain biking adventure in a weekend!

Singletrack magazine went for the big one – the legendary Grywne Fawr reservoir ‘killer’ black-graded route. Whichever way you dice it, it’s a long, tough day in the saddle and at some points – particularly the climb to the top of Y Das – be prepared for some pushing!

Mountain Biking UK mag rode a red-graded route around Mynydd Troed and Llangorse, with a killer climb and stunning descent to finish on.

And sitting just outside the Brecon Beacons National Park is one of our own recommendations – ideal for family rides or beginner mountain bikers. The Begwns common is criss-crossed by a network of bridleways and footpaths – great for a ride or a stroll – and affords stunning views over to the  imposing, north-facing scarp of Black Mountains.

Our version starts just down the road from us in the town of Talgarth, and differs from the route published in the MTB Brecon Beacons route pack by cutting out some unnecessary tarmac and adding an extra descent, hailed by some as one of the best in singletrack descents in Wales. 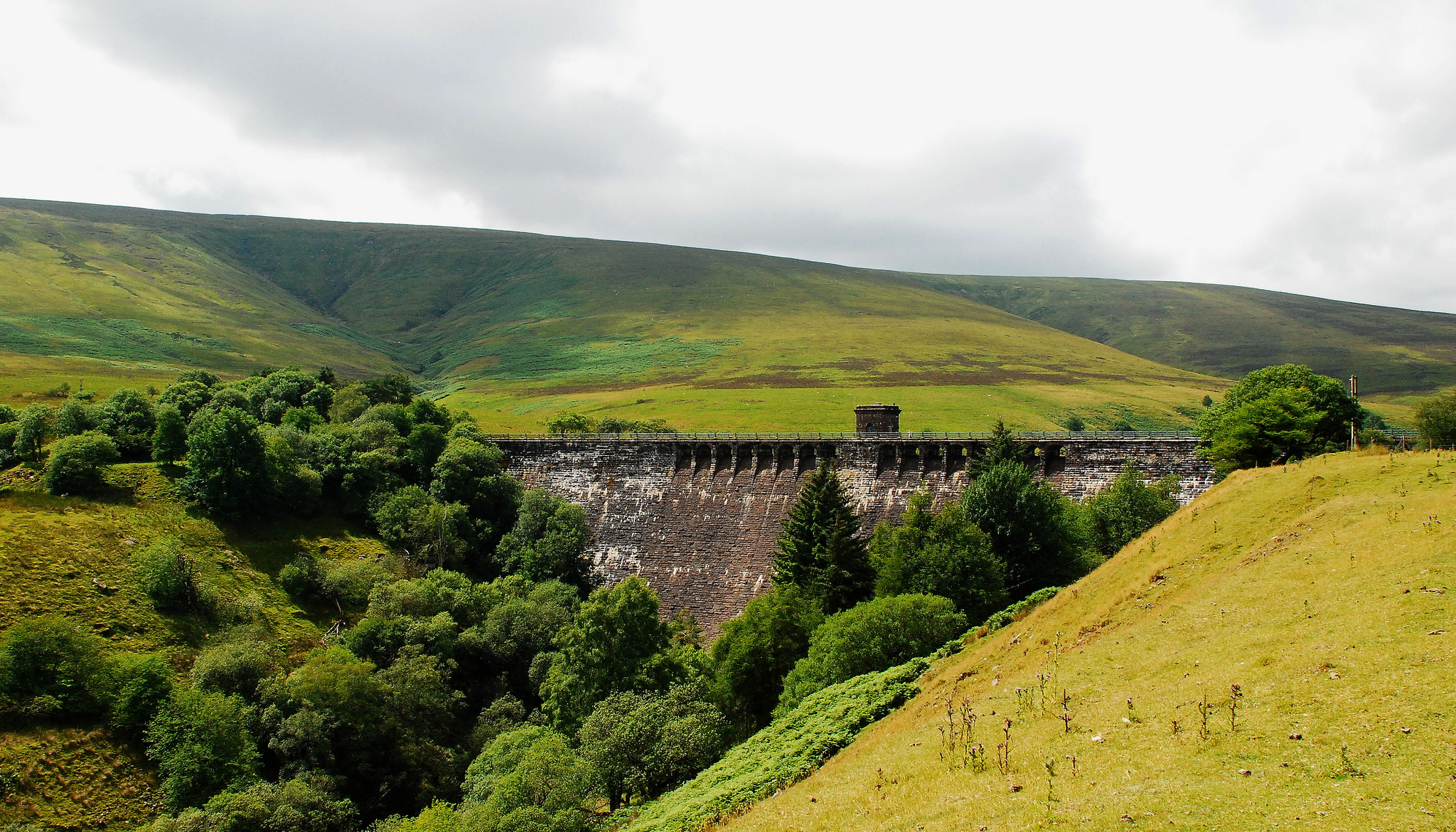 From Talgarth, the route follows country  lanes to the lower slopes of the Black Mountains before a push-carry-thrutch up a well-armoured path to the top of Y Das. From there its a plummet to the shores of the Grwyne Fawr reservoir and onwwards through Mynydd Du forest. The ride then climbs on gravel fire road before spitting you out on wild moorland below Crug Mawr. Another whip-fast, swoopy descent over moorland track and woodsy switch-backs lands you in Llanbedr village.

Draw breath now before climbing back high into the guts of the Black Mountains to a broad shoulder below Pen Trumau. A final treat lies in store – a rollercoaster plummet back to base down grassy sheep track and narrow, rocky chutes.

Be aware that this is a committing route, in a remote, mountainous setting – check the weather before setting off, go properly equipped for a big a day in the hills and be prepared for some big, long climbs.

Check out the map, or snag a GPX of the route here.

Another route starting in Talgarth, this time skirting the twin peaks of Mynydd Troed and Llangorse before climbing (painfully!) to the ‘crux’ below Pen Trumau. 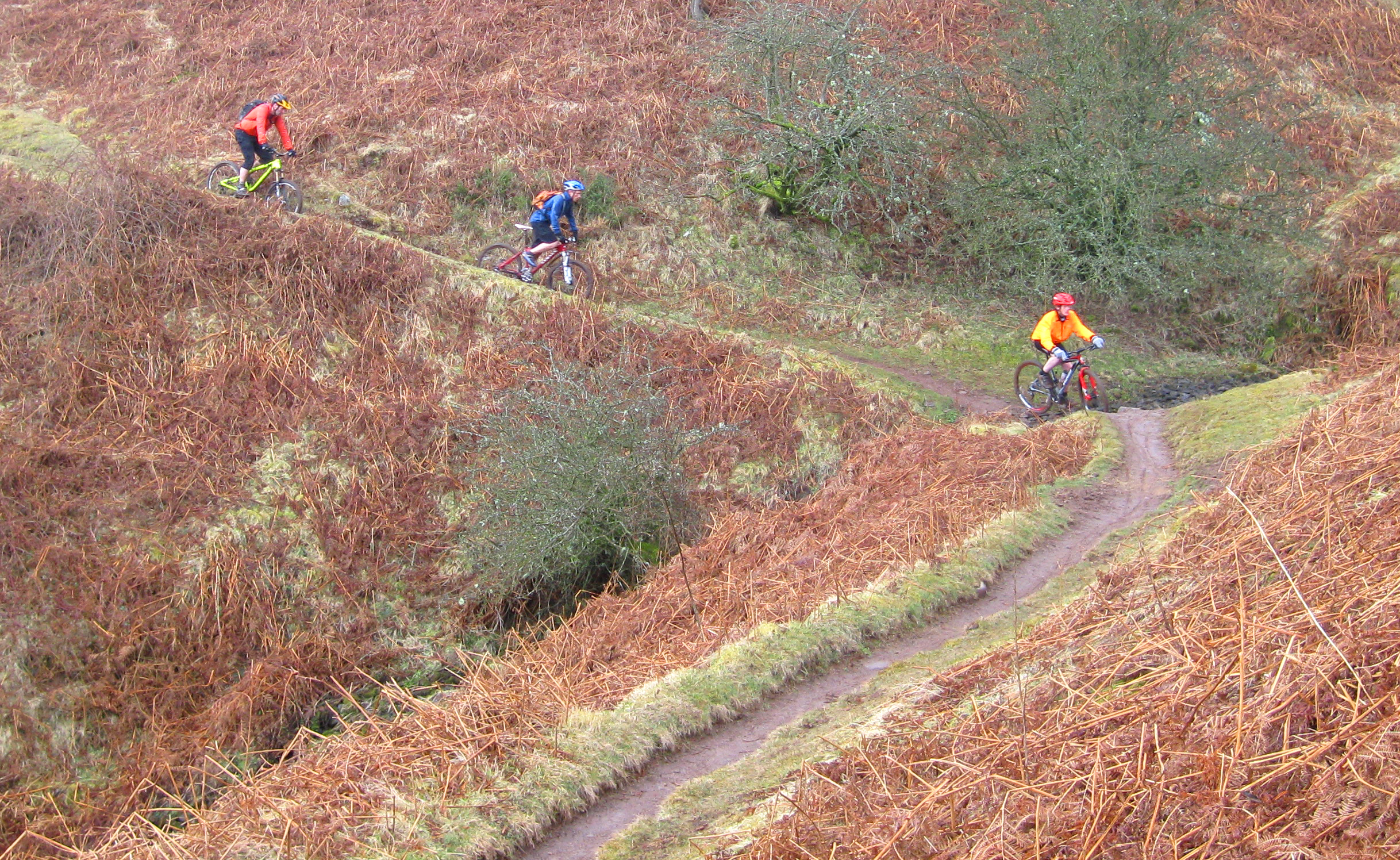 The route ascends from Talgarth on tarmac before joining the ‘Three Rivers Ride’ bridleway towards Cefn Moel. After the rim of broad cwm,  steep, tight and twisty singletrack plunges to Blaenau Draw farm. You cross the A479 and climb on a mix of tarmac, farm track and then moorland trail to the shoulder below Pen Trumau. Finish on the same rocky descent as in the previous route before heading back to Talgarth via tarmac and more bridleway.

This in an easier option – ideal for cycling families – over rolling countryside to The Roundabout, a tiny copse encircled with a stone wall. A stone bench there makes a great spot for lunch with a 360-degree panoramic view of the Black Mountains, Brecon Beacons and marches of Radnorshire!

Start at the layby by the cattle grid on the edge of the Begwns common on the road between Clyro and Painscastle. Descend the hill towards Clyro a couple of hundred metres and then turn right onto a tarmac track beside the common.

Follow your nose west over moorland track to the steep hill topped by the roundabout. There’s no permissive cycleway up here – and in any case it would be a very steep pedal – so push up the hill before descending the same way and following more tracks back across the moor to the start.

Our mountain bike hire service offers a range of bikes suitable for riding in the Black Mountains and Brecon Beacons, starting at £17.50 for a half day hire. Find out more here.

At the shop on Forest Road, we stock the official Brecon Beacons mountain biking route pack – which includes the Talgarth and Mynydd Troed routes, plus several more.

We also carry the Good Mountain Biking Guide which has hundreds of mountain bike routes in Wales and across the rest of the UK.