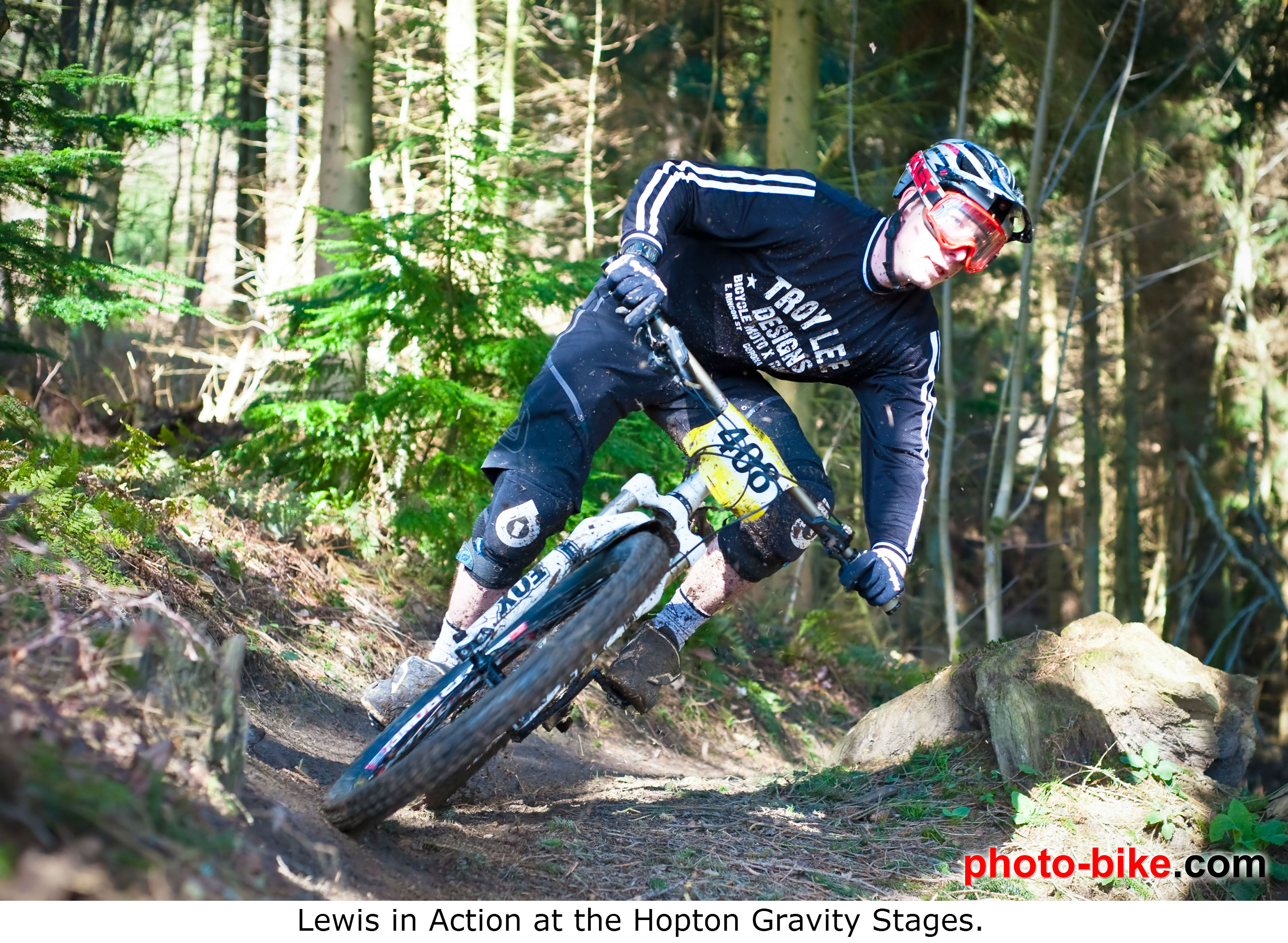 Drover-sponsored enduro racer Lewis Day took the top podium step at the Hopton Gravity Stages recently, and came up with this race report of his big win.

Stay tuned for some more mountain biking goodness from Lewis as he gives us his top tips for enduro riding – coming soon!

Over to you, Lewis…

Pearce Cycles are known for putting on a slick event with their competitions always a favourite among race regulars.

All 4 stages finished in the same field, and with the music playing and flags flying, the atmosphere was just so.

All the stages were open for practice on Saturday so there were only a few riders getting a last-minute look at the course and slipping down the hill early Sunday morning. Their mud-covered clothes were a sure sign that stage conditions had worsened since practice the day before.

Racing kicked off at 10:30am with the hardtail category, with the elite class racing last. Overall there was a good turnout of 180-odd riders including pro Tracy Mosely and newly-signed UK WTB Enduro Team rider Robert Williams. Unsurprisingly, both won their categories comfortably!

The atmosphere at enduro events is also very relaxed and friendly, and this was no exception. There were no big egos on show – everyone was just out to enjoy themselves.

Throughout the day there was a lot of talk about trail conditions (raising questions of bike set up etc) and also who was in the lead after each stage. I tried to switch off from all the chatter,  the theory being that if I took notice I might get too cocky or begin focusing on the bike’s flaws.

Also I’ve learnt the importance of a good fitness base for this style of racing. There were riders there I know who are fairly equal when it comes to descending – but I also know they can really struggle with the sprint climbs.

The stages were really enjoyable and well thought out. The mix of downhill sections and uphill sprints played to every riding style giving every rider a fair chance. It consisted of 4 stages – one stage ridden twice and the other two sharing lower sections.

The top of Stage 1 used an old downhill track which was tight and rooty but had a satisfying flow when you got it right. This opened up onto one of the trail loop descents – scarily fast and a little unnerving in the wet, greasy conditions – with a couple of little jumps thrown in to keep the flow.

A fire road uphill sprint offered a good opportunity to make up some time if you had the legs for it. Dropping off the side of the road was a fast-flowing singletrack section through the trees into a shallow singletrack climb. This burst out onto a fire road descent where you could afford a little breather before dropping into the last section – awkward, off-camber singletrack with some nasty little corners to catch you out, before a sprint finish into the field. It was a case of catch your breath then head back to the top.

Stages 2 and 4 started on a completely new section known as ‘the quarry’. Newly built, the trail had fresh, loose soil and rocks making it very slippery when wet. Nonetheless, it was one of my favourite sections, featuring tight corners and a steep chute to finish.

From here it joined a relatively flat area of the trail loop before dropping onto a long, lung-busting fire road climb. There was more downhill before the track shot up a steep and evil climb built for the event – it caused a lot of pain across the field, and even had a few walking – another good spot to make up some time if you had the legs.

The top of the climb presented you with a mellow downhill into a series of jumps ending on a rather large double, separating the men from the boys! From here, the trail traversed down to the finish field where a sharp, wet, grassy 90-degree left lay in wait to catch you out before sprinting across the line.

Winning didn’t sink in immediately, so it came as a bit of a shock! Openly I was hoping for a top 10 and secretly I was hoping for top 5 – but not once did I expect to win! Looking at the stage times as they came in throughout the day, it started to dawn on me that I could be in with a chance of getting on the podium – but I was convinced either the timing was wrong or I was going to have a massive crash on the next stage and throw it all away.

Needless to say, winning was a great feeling and one that I’m sure is dangerously addictive!

Many thanks to www.photo-bike.com for use of their photo of Lewis at work!