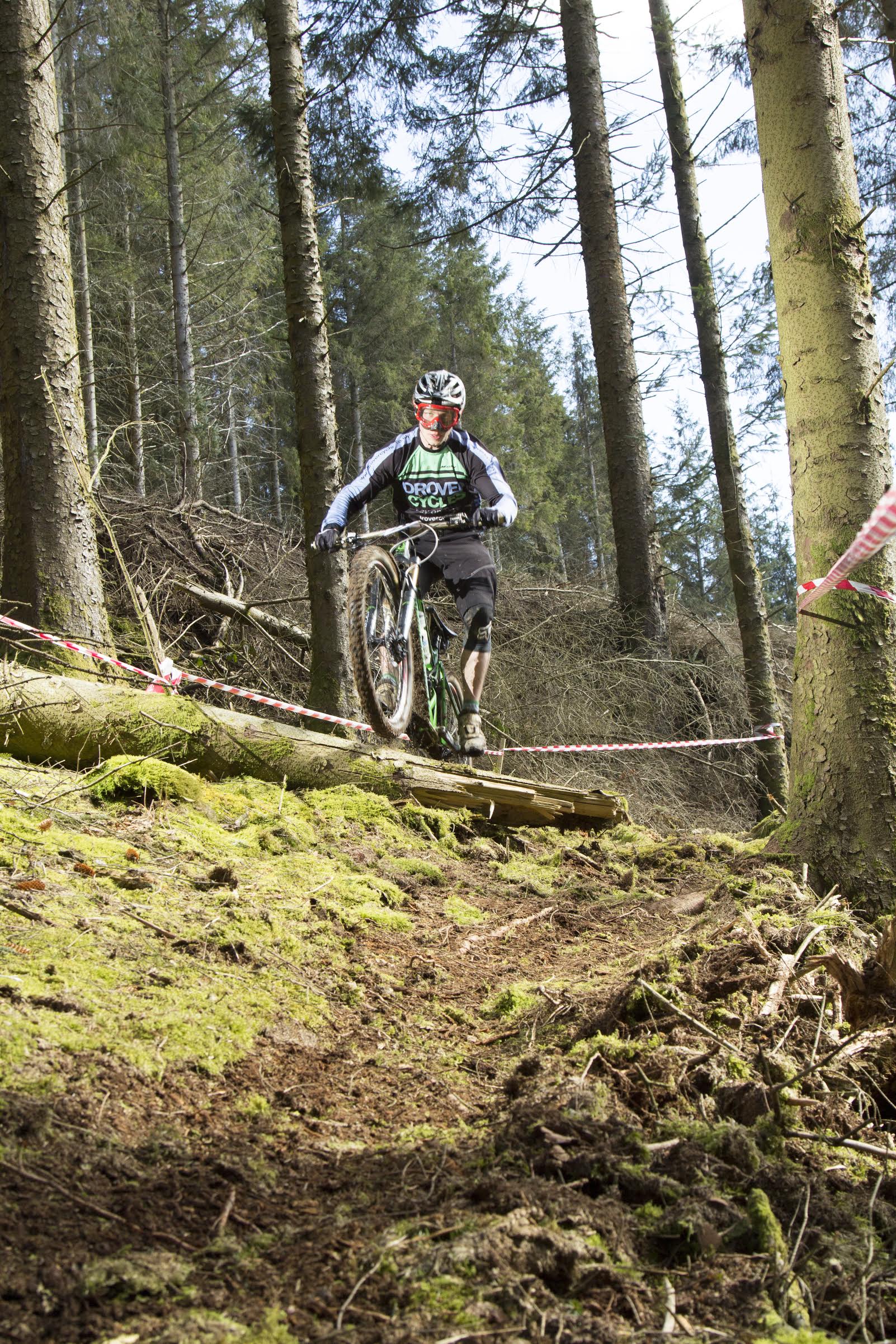 Drover Cycles sponsored rider Lewis Day narrowly missed out on a spot on podium at the opening round of the Welsh Gravity Enduro Series a couple of weeks back when a blown tyre robbed him of placing in the top three.

He was hoping for better luck last weekend when he took his Mondraker Dune up to Coed Trallwm for the first in five rounds of the Red Kite Enduro Series.

We’re Red Kite co-sponsors, along with Mondraker, and were on hand over the weekend to provide emergency spannering and repairs. It’s fair to say we had a cracking time and we’ll be back for round two on April 18-19th.

But how did Lewis get on? Did he pilot the Dune to victory, or did the podium elude him once more?

Over to Lewis for this comprehensive race report…

Coed Trallwm was to be the first round of the Red Kite Mondraker Enduro series and afterhearing nothing but good reports from last year’s events, I was excited to see what all thefuss was about.

Red Kite Events is a relatively small operation with main man Neil Delafield and his colleague taking on both event organisation and trail building. With this in mind, it was a pleasant surprise to see that the weekend’s racing would be made up of five different stages, three of which were freshly-cut, with the remaining two made up of freshly cut sections added to existing trails.

Two race formats were on offer: a two or a one-day event. The former involved practice and racing of stages 1,2 and 3 on the Saturday followed by 1,2,3,4 and 5 on the Sunday. The latter involved racing all 5 stages blind on the Sunday. Either way, you were guaranteed plenty of quality riding for your money.

Upon arrival,  I immediately noticed the relaxed atmosphere, from bothracers and organisers alike. This left me feeling a little lost – usually time is of the essence at these events, but that didn’t seem an issue.

Practice on the Saturday morning started around 10am and finished around 12ish. Anyhow, I kitted up and headed out to stage 1. The relaxed vibe encouraged social riding, so I moseyed on up chatting away to both familiar and new faces.

Stage One was all new. This was a welcome break from the trail centre bashing of the winter and quite a contrast from the Welsh Gravity Enduro opening round at Bike Park Wales the previous weekend.

We were treated to moss, roots and mud all thrown together on a steep off-camber hill side. This is usually the sort of thing that I relish so I was happy with what I found. This was the shortest of the stages throughout the weekend. 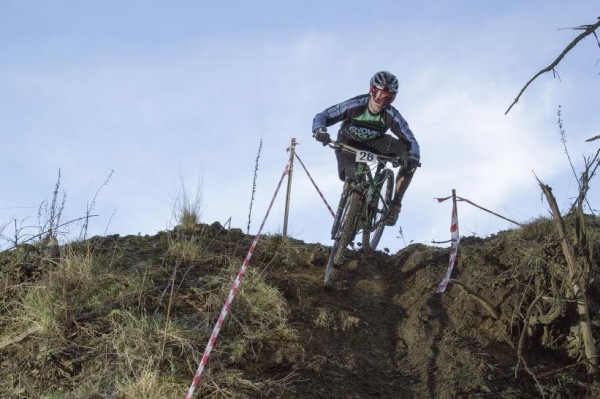 Stage Two started at pretty much the same point as stage one and was much the same with loose corners and roots to contend with in the top section – until you suddenly left the woods, dropped a steep chute onto the wall of a quarry and down again to cross a fire road. It was quite a contrast and had a few people twitching! Dropping off the fire road you were met with a tricky steep left hander and then it was a scary fast sprint through the trees to the finish.

Stage Three was the final stage on Saturday. This was a more established trail with a few man-made obstacles, such as rock gardens and board-walk over boggy sections. It was a great fun stage with a combination of steep, loamy corners and tricky wire-covered stumps. This reminded me very much of old-school UK downhill tracks, a sign of progression I suppose.

So – practice done, a quick banana and it was back up to stage 1 ready for racing. Saying that, I needn’t have rushed the refueling. Racing started at 1pm, but as long as you were done by 4:30pm you could race at your leisure.

Unfortunately, I’d ridden this stage far better in practice than when I was up against the clock. 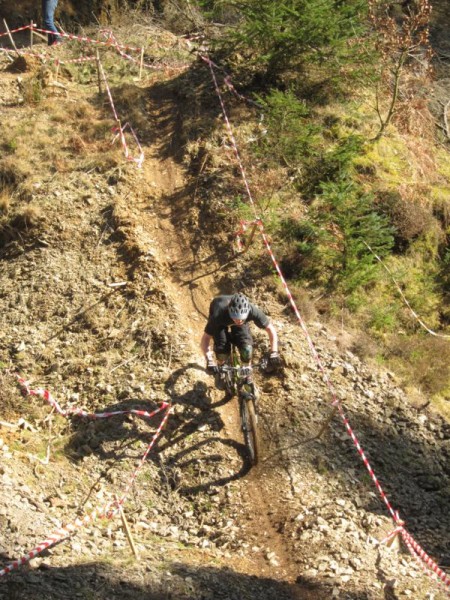 I knew already that all the stages would be difficult to race as there were so many obstacles to trip you up. The first left hand corner was nothing complicated – just a flat corner around a stump – but it was to plague me all weekend. The front wheel washed wide so I dabbed a foot. I rode pretty much the rest of the top section clean but was fighting to get clipped back in until I hit the fire road a couple of corners from the finish line. Never mind – it turned out that most of the competition had also had a bit of a nightmare, either suffering mechanicals or crashes. Chatting away, we pedalled on up to stage 2.

By this point I was feeling quietly confident in the knowledge that I had at least stayed on the bike. Unfortunately this was all about to change!

After riding the top stage to satisfaction, I then disappeared off the side of the trail on the steep corner in the lower section. I rushed back onto the bike and sprinted as hard as I could to the finish knowing I had lost valuable seconds.

For stage three, I had a word with myself. I’d decided against trying to race the track, and focus on getting down smoothly, without issue. This worked out nicely and gave me a respectable time.

This gave me a new-found key for Sundays racing: smooth and steady. These weren’t the sort of trails that rewarded full-on race attack mode.

At the end of the day, you clocked in and your times were handed to you right there and then. 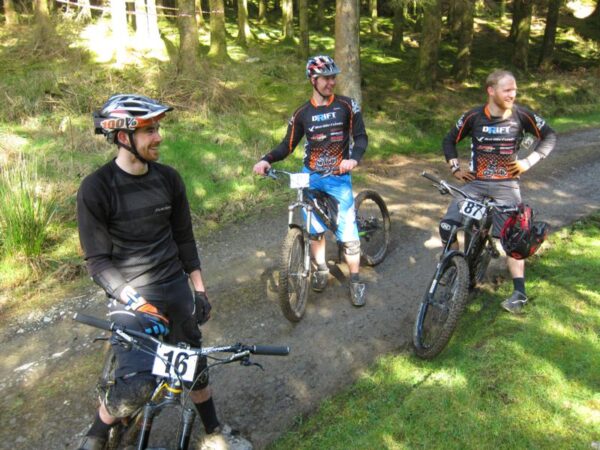 When every rider in your category was done, your position was determined, I left that evening sitting in 4th place. Seems odd to say I was slightly disappointed but I just knew I could have done better. Still, another day’s racing to go and I had a fresh outlook which I felt sure would pay dividends.

Sunday morning and I was eager to get going and try and make up for lost time.

Today I was lucky enough to have the company of riding buddy Brock who had entered for the one-day race. This meant he would be racing all 5 stages without any practice. For me, stage 1, 2 and 3 were repeats of yesterday but 4 and 5 would also be blind with no practice allowed.

By this point, I had got into the relaxed vibe. The sun was out and Brock and I were happy to take our time. After all, we had all day to race 5 stages.

Stage One went well – smooth and steady – but that was the plan. 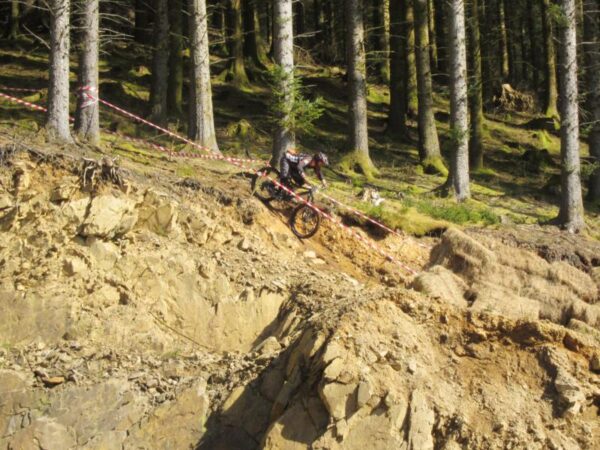 Stage Two was going well until a stump claimed my right pedal as its own, stopping me dead and sending me over the bars. Luckily, I managed to get going again reasonably quick so I didn’t feel as though I’d lost much time. The rest of the stage went OK but I had issues getting clipped back in, completing the stage without any dramas.

I then discovered I had damaged my pedal and it wasn’t allowing me to clip back in. The spring holding the cleat had been dislodged and I returned to the van to try and bodge it. In the end, I swapped out the pedals for a spare set, changing the cleats on my shoes too, with time to spare – another reminder of the relaxed vibe.

Stage Three went well. No dramas to report and I was once again enjoying the day. Brock had three clean but steady stages, which he didn’t seem too ecstatic about, but I knew that clean runs counted for a lot here. I had a feeling he could be on to a good thing if he could stay rubber side down. 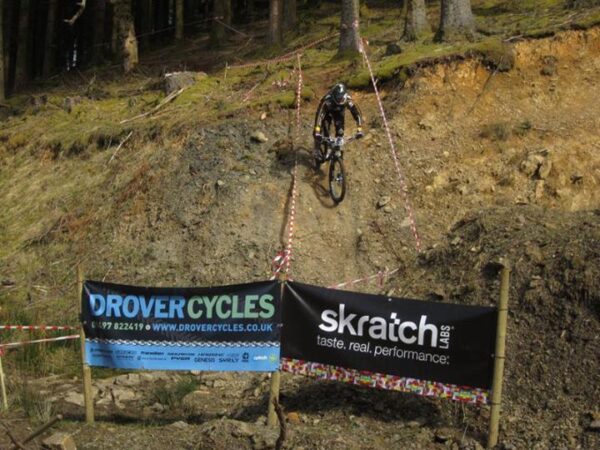 Stage Four was the first of the blind stages for me. We headed up and up into the open where we were met by glorious sunshine and epic views.

This stage was fast. Starting out using some of the existing trail, there were flat, loose corners with fast sprints between. This section would take us down to a fire road sprint with a small bus stop forcing you to get on the anchors. Just as well as the trail then disappeared off the side of the road into a steep, tight and fresh off-camber section, possibly my favourite section of the weekend. From then on it was a combination of flat out straights linked with flat sharp corners.

By the time we reached Stage Five, we’d really got into the groove of the relaxed format and we were very nearly the last people down the hill.

Stage Five was on the opposite side of the valley to the previous stages, so it really was unclear what we might find.

Chatting to a few people at the bottom revealed that it was fast but with one or two sections that could catch you out at speed. They weren’t kidding. The first straight was long so you were on the pedals, top gear, giving it the beans. 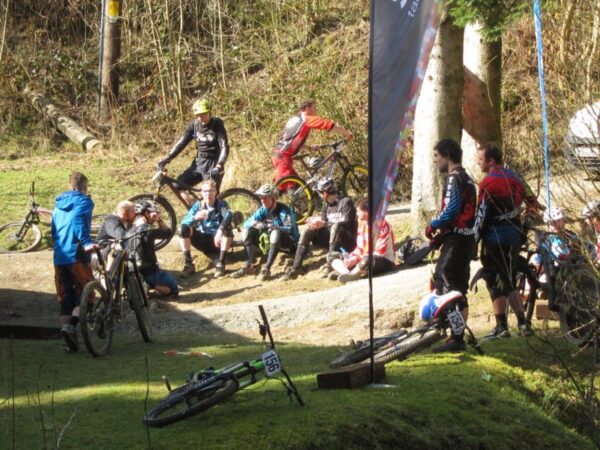 There was then a little kink in the trail, which posed no real threat as you could see it way ahead. At the end of the next straight there was another similar kink – but it was tighter and a large stump sat on the outside which I only narrowly avoided hitting square on! The stage then continued down fast open sections and into the trees where there were a few nasty little sprints to test already exhausted legs. The stage finished up winding through the trees which demanded pedalling with the finish line in sight.

With all the stages done, we headed back to the centre, handed in our timing chips and tried not to get too carried away with our preliminary positioning, knowing there were still some of the quick boys yet to come in. We treated ourselves to a coffee and a cake and enjoyed the last of the sun. 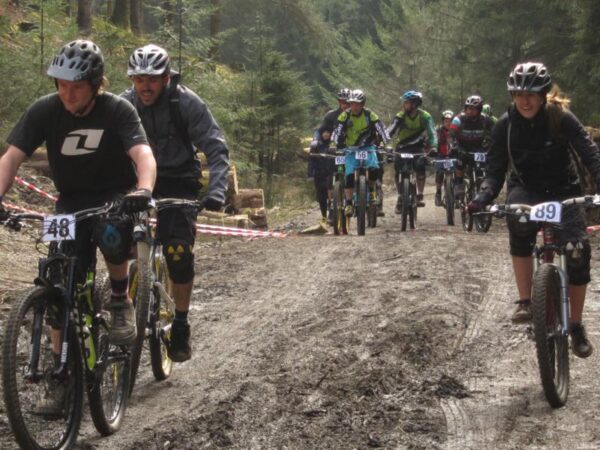 So how did we get on? Sadly I couldn’t improve on my 4th place in the weekend seniors, narrowly missing out on the podium but not too disheartened given my two offs.

Happily, Brock redeemed our efforts and took the 2nd step on the podium in the Sunday seniors.

Overall a great weekend, a conclusion that was echoed throughout the field.

Enter the next round of the Red Kite Mondraker Enduro Series here.

Big thanks to snapper Darren Vidler for the top two images of Lewis in action. Contact Darren for commissions & rates at [email protected] Buy his pics online at Roots and Rain.

And thanks also to yoga-loving lensman Tom Stickland for the bottom two pics. Check out his own race report and loads more photos here.

Remember Drover Cycles is one of only a handful of Mondraker dealers in Wales, and the only one in the Mid Wales region. We have access to Mondraker’s extensive demo fleet, and are well positioned for Mondraker demo rides at the Forest of Dean, Brechfa, Bike Park Wales, Hopton, Afan and Llandegla. Get in touch if you fancy trying one for size!