Super bikes with super brains – save £2,000 on the future of suspension tech

What Mountain Bike is the go-to choice for the discerning buyer with an eye on what’s hot – and what’s not.

Nifty silicone wizadry assesses terrain on the fly and adjusts suspension automatically – ten times a second. In other words, you leave your shock open and the bike does the work, optimizing settings for whatever ground you’re riding on.

What MTB described EI as the future of mountain bike suspension, declaring: ‘It is awesome.

‘It’s almost sentient, near as damn it immediate and only the slight motor murmur intrudes on an otherwise silent, seamless operation.

‘Even when we’ve raced it flat out or deliberately tried to defeat it doing dumb stuff on the sketchiest mountain descents, EI hasn’t just coped, it’s treated the roughest trails with total contempt.’

The good news is, this kind of technology isn’t the unique preserve of a few lucky mountain bike journalists, and you don’t need to hightail it to some far flung bike show to gawp at prototypes to experience it yourself.

We have in stock TWO EI-equipped carbon superbikes – from German manufacturer Haibike – and we’re knocking a staggering £2,000 off the RRP on each – this is an opportunity to bag a cutting edge carbon bike at a bargain price

The Haibike Sleek Team 29er is the ultimate, super-light, full-suspension race weapon, featuring a full Reynolds XC carbon wheelset and weighing in at a svelte 10.7k. Our model is in a large and it’s brand spanking new, completely unridden. 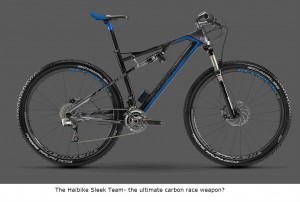 We also have an ex-demo Heet RX with 26” wheels. It’s only got a few miles on the clock, comes practically new and – as ever – has been well looked after by our in-house tech team. 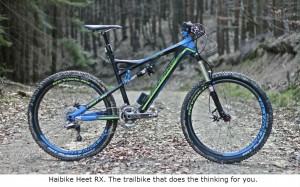