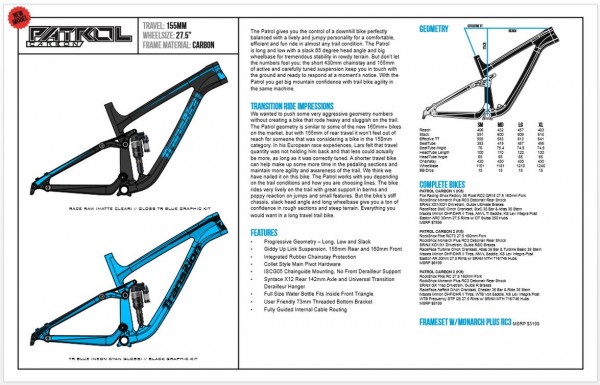 The secret is out!

US brand Transition unveiled their 2016 line-up at Crankworx Whistler, with an all-new carbon Patrol headlining the Giddy-Up trail bike range.

The Patrol is Transition’s long-travel enduro bike, designed around a Horst link suspension system which replaced the much-loved single pivot set up.

Test riders across the board declared the 2015 bikes a flat out success and here in the UK they quickly became rare as hen’s teeth as keen riders snapped them up.

2016’s new Transition Carbon Patrol is eagerly anticipated and demand is likely to be just as high – the first drop lands next m0nth – we’d highly recommend getting pre-orders in now!

The bike follows the new trend for long, low and slack bikes – ideally suited to steep and techy enduro terrain.

Transition say the carbon Patrol has been completely redesigned to maintain the aggressive styling of its alloy stablemate, but with simplified and cleaner lines to optimize weight and stiffness. As the pic below from Vital MTB shows, this bike is seriously drool-worthy. 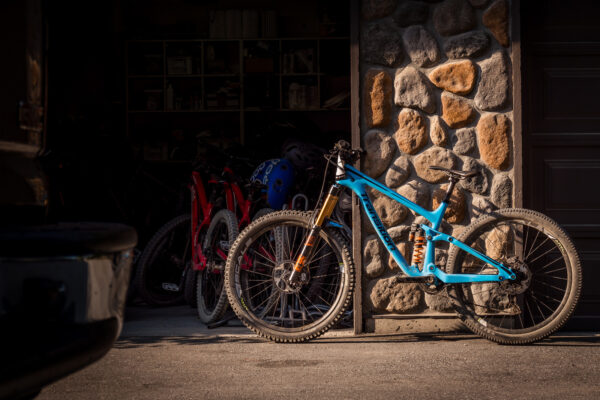 Weighing in at 2900 grams, the EPS moulded carbon fibre frame saves you more than half a kilo (650g) over the alloy version.

The carbon Patrol will be available frame only in stealth black or Transition blue for £2599.95, with complete bikes starting from £4300.

We can spec a custom build for as little as £4000; although at this level, you’ll want to spec parts to complement the stunning quality of the frame and we’d anticipate most custom options would run to £4500+.

If you want to see for yourself why Transition have reaped so much praise in the last 12 months, we have two of the Patrol’s stablemates in store for you to demo. We are one of only a handful of Transition Bikes dealers in Wales, and the only one in the mid-Wales area.

The Smuggler is Transition’s hooligan 29er.

We also have the shorter travel Scout – its 125mm  of rear travel is arguably the sweet spot for UK trail riding.

Get in touch to demo one of the bikes, or to discuss pre-ordering the carbon Patrol.