Unstoppable Saracen – another gong for the Mantra Trail in MBUK 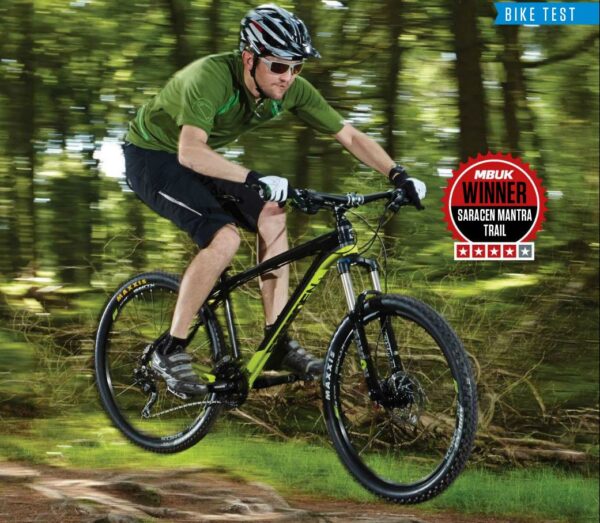 And at the other end of the scale, Saracen have been reaping accolades from the mountain bike press for their outstanding budget hardtails.

In June their Mantra Pro bagged a near-perfect four-and-a-half out of five stars in a What Mountain Bike magazine test ride.

And it came runner up in Mountain Bike Rider magazine’s prestigious hardtail of the year contest.

Then last month the Pro’s bigger brother – the Mantra Trail – went one better in What Mountain Bike’s ‘budget bike’ test by taking top slot in the mid-price category.

The tester wrote: ‘The UK has always had slightly different take on hardtails to the rest of the world. In most territories, hardtails are essentially cross-country race bikes, even if only in spirit. The Mantra isn’t. It’s designed, essentially, to be fun.

‘The Mantra’s compact, low-slung frame pretty much yells: “I’m a hoot to ride!”‘

The Trail retails at £799 and the extra £200 over the Pro buys upgrades including a plusher, more composed fork and 10-speed transmission.

Remember the Mantra Pro forms the mainstay of our high fleet, it’s a very similar ride to the Trail – come and try before you buy!