Here at Hay we are ideally placed for two-wheeled adventures, both on and off road.

On the eastern edge of the Brecon Beacons National Park, our back yard has endless trails providing world-class mountain biking.

And for tarmac outings, we’ve got the rolling countryside of Herefordshire and the Radnorshire Marches to the north of our Hay-on-Wye HQ.

To the South there are more testing ups and down, including the highest tarmac road in Wales – Gospel Pass!

In fact, for road cycling routes right out of our car park on Forest Road, you’re spoilt for choice: Alpine-style switchbacks, historic monuments, award-winning pit-stops, categorised climbs and even a Tour of Britain finale – cycling in South Wales and Herefordshire has got it all!

Here’s our top picks for four road cycling routes, varying from a sub-50 mile trundle to a 90-mile epic!

The quiet country lanes and undulating hills of Radnorshire are perfect for exploring on two wheels. This route straddles the border between England and Wales, takes in some of the pretty market towns on the Black and White Villages tour and skirts the northern slopes of Hergest Ridge. From Hay, head towards Clifford and cross the Wye via the toll bridge at Whitney (free for cyclists), 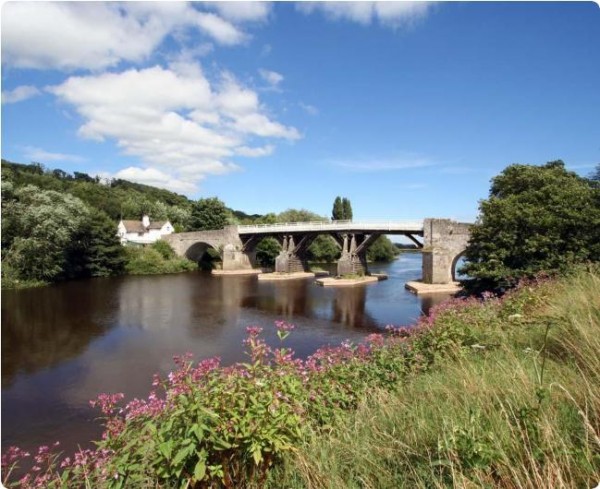 Head north east on back roads to Eardisley and continue in the same direction onwards to Almeley (pub and shop) before swinging north to Lyonshall to briefly join the A480 and A44 to Kington. (Lots of refuelling opportunities here).

Leave Kington on the A44 then head south west on the B4594 north of Hergest Ridge and follow it through the villages of Gladestry, Newchurch, and Rhos-Goch to Painscastle.  Here, the Roast Ox makes a great place to stop for a drink before the last climb of the day up to Begwns common before a rollercoaster plummet to Clyro.

Head back into Hay, crossing the river on the B4531 as you reach town.

Head up into the hills from our shop and within the hour you’ll have topped out on the highest paved road in Wales, Gospel Pass.

From the shop, toil south up and then up again below the scarp of Hay Bluff and into the dramatic scenery of the Black Mountains.  Their ridgeline stretches away to the south west as you hit the highest point on your ride – Gospel Pass, at 549m.

Take some care now as you descend sometimes steeply to Capel-y-Ffin and onwards to Llanthony, where you can break the ride at the pub and restaurant among the ruins.

Keep trending south towards Abergavenny then quit the main roads for the quieter B4246 and A4077 to Crickhowell where you cross the Usk and head west on the A40.

From here, you can either tackle the climb up the A479 through historic Tretower to Pengenffordd, or swerve the traffic by briefly continuing west on the A40 before peeling off north at Bwlch along the B4560 through Llangorse.

Either way, you end up in Talgarth, where the restored watermill hosts the Baker’s Table, an award-winning eatery, and a top spot for home-made cakes.

After refuelling, head back to Hay on quiet lanes through Felindre and Llanigon.

LLanthony Priory  – Rest up among the ruins while you refuel from the bar.

Latte -Da Tea Room Crickhowell – light lunches, good coffee and cakes with a garden out the back.

Another one taking on Gospel Pass before crossing the border into England and returning via sleepy Herefordshire villages. Stop at the most haunted pub in Wales or take a detour to Arthur’s Stone!

Follow the Gospel Pass route above, but instead of heading south to Abergavenny at Llanvihangel Crucorney (where you’ll find the haunted Skirrid Inn – they do serve spirits) continue east to Skenfrith then double back north east through Garway, Kentchurch, Pontrillas and Abbey Dore to Vowchurch. 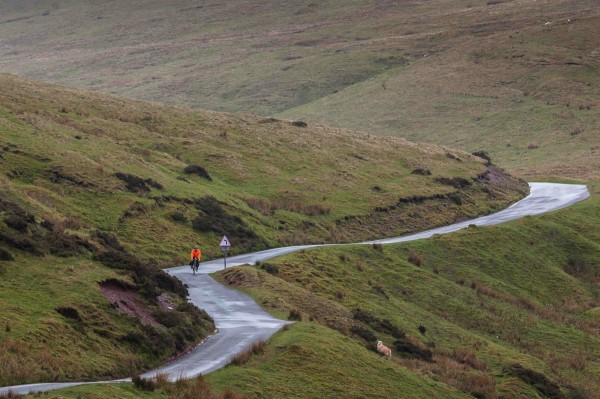 Go west to Michaelchurch Escley then north and east to Dorstone.  Here, Arthur’s Stone lies just off the sharp dig north east over the hill to Bredwardine.

LLanthony Priory  – Rest up among the ruins while you refuel from the bar.

The Mill at Poston Mill, near Vowchurch:  Everything from burgers to pizzas, and coffee and cake.

The Bridge Inn, Michaelchurch. A peaceful, 16th-century riverside pub with a menu specialising in locally-sourced food.

The big one! This monster takes on the legendary climb up The Tumble – the Stage 3 finale for last year’s Tour of Britain – to the World Heritage Site of Blaenavon.  A testing switchback plummet awaits before an onwards Alpine-style toil up and over the Epynt.  This is a three Shredded Wheat route if ever we saw one!

From Hay, head west to Talgarth via Llanigon and Felindre and then either climb up and over Pengenffordd on the A479, or take quieter roads through Llangorse to Bwlch. You’re heading for Crickhowell, then onwards to Govilon where you peel off south for the climb up The Tumble. 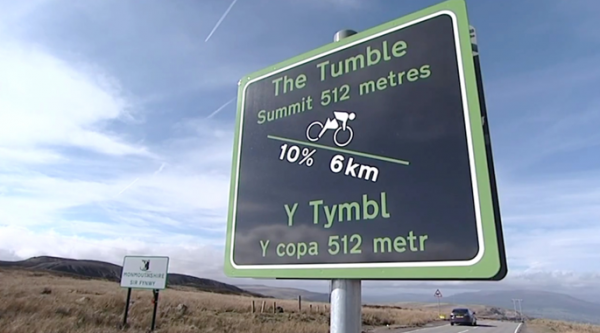 Drop into Blaenavon, head west to Brynmawr and Beaufort then climb again for a steep and hair-raising descent to Llangynidr.

Go north west through Talybont to Brecon then climb once more on the B4520 Epynt pass to Builth.  (If the Epynt doesn’t appeal, you have the option to head east from Brecon and return to Hay via Llangorse).

From Builth, cross the Wye to reach the quieter B4567 on the eastern bank of the river and go south through Erwood to Boughrood. Stay on back roads (B4350) to Glasbury, cross the Wye again and return to Hay staying on the B4350.

Latte -Da Tea Room Crickhowell – light lunches, good coffee and cakes with a garden out the back.

By the River Cafe, Glasbury – Coffee, cakes and and snacks in a beautiful setting on the banks of the River Wye, check opening hours, as limited at the moment.